Rich Klein is a writer from Brooklyn who also moonlights as Batman. Seriously, he's batman. Trust me. 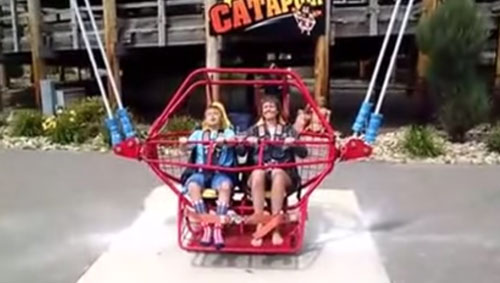 Yeah, this could have gone very wrong. But honestly, I’d still rather take my chances on this than the tea cups. Because yes, a potential maybe chance death still better than the nausating feeling I get from that hellish ride.

Let me tell you, bungee jumps and looping coasters are fun thrill rides and all. But the realest adreniline rush comes from trying to keep your vomit in during a non-stop spinning ride of death. 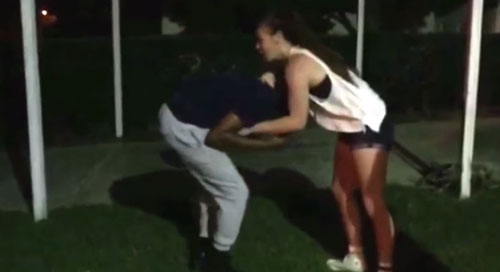 Behold The Power of BJJ

I’m quite an avid BJJ and grappling fan, so I absolutely love this. The girl commenting in the background, not so much.

If you don’t know what Brazilian Jiu Jitsu is; just think of it as a mix of judo, wrestling, and submission grappling. Think chokes, armbars, heel hooks, leg locks, and so on.

The girl in the video obviously knows what she’s doing, transitioning from triangle chokes to armbars with ease. The dudes getting obliterated obviously know nothing. This of course brings up that old cliche of never judging a book by its cover. If you do, you may end up passed out in some park with everyone laughing at you. 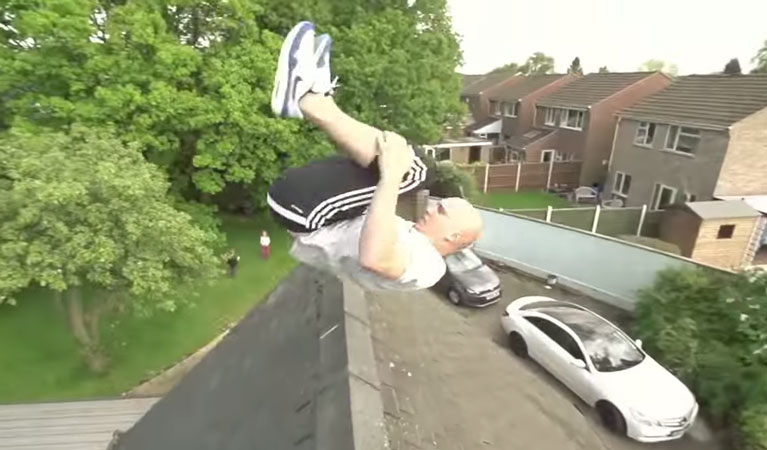 Yes, you read that right. OVER A HOUSE.

This is Damien Walters. He is apparently a former gymnast and current stuntman for films such as Kick-Ass and Captain America. It would also seem that he is a real life superhero. He has to be right?

I’ve seen a lot of stunt and gymnastics videos before, but no one has ever cleared an entire house. This is just insane. Forget being a stuntman, this dude needs his own movie pronto.

Introducing the real king of the rhumba beat

So this is the hot video that is blowing up today and all I have to say is: Get it, big boy.

Come on, this kid has it all. The shimmy. The cartwheel. The charisma. Imagine the action this kid pulls at the school dances.

And yes, I have seen the obvious similarities between this dancing menace and Manny and Modern Family.

And yes, this kid’s routine is now better than Jim Carry’s version. 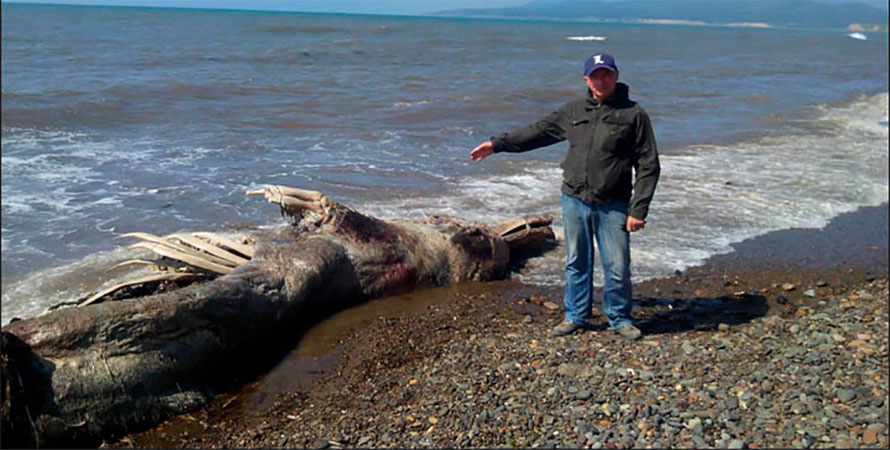 So, here is reason one million as to why I do NOT like the ocean.

According to The Siberian Times, the creature washed up on the shore of Sakhalin Island.

‘The body was about two metres long though it was difficult to judge, and went into a tail of about three to five metres. The creature was hairy, with some paws or feet, and no fins. We were very confused that everything was covered with hairs.’

‘At first glance we saw what looked like the muzzle of a dolphin. But after a closer look we saw it had big jaws of approximately 70 centimetres with rotten teeth.’

But there was new intrigue today after a local resident gave a graphic account of the remains, suggesting a bony protrusion from its underside could be paws or feet, and adding that it had no fins. This witness also suggested it was much longer than initial reports.

Most curious of all was the fact it also had fur on its tail and was unlike anything ever seen in Russia.

The Siberian Times followed up by saying that scientists suggested that it may be anything from a Ganges River dolphin or Giant Beaked Whale. But I’m not buying it. After all this is Russia we’re talking about. Who the hell knows what type of experiments Putin is behind. My guess is that this super man-eating dolphin got loose from the labs and eventually had to be put down by the entire Russian army before they were exposed.

A mysterious sea creature with fur washed up on the shore in the far east. No one has identified what it is yet pic.twitter.com/5yUSxbj3kP

Either way. This beast just serves as another reason as to why I’m not going swimming anywhere for a bit. 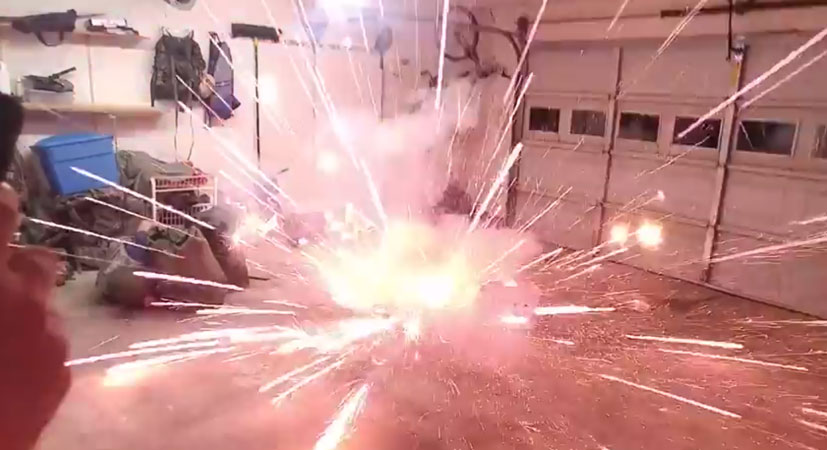 I could sit here and crap on these dudes for even thinking about such an idiotic and dangerous idea.

But I won’t. You see, I’m a dude and I enjoy dude things. Who hasn’t lit off some fireworks in an inappropriate place!? At least these guys were safe and wore helmets.

So instead, I’ll just sit back and enjoy a pretty awesome indoor explosion. 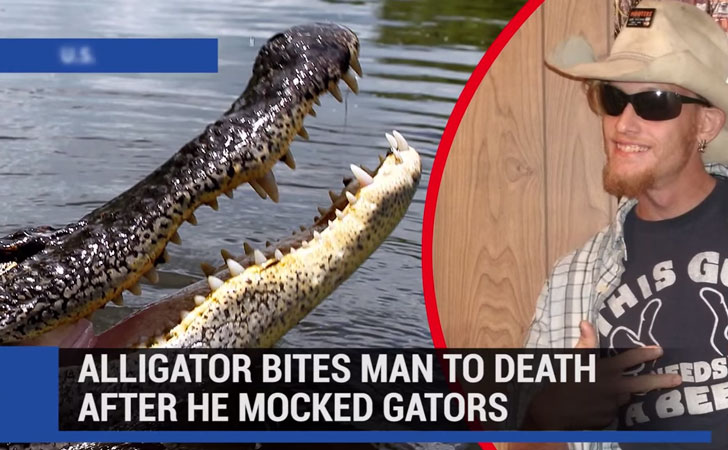 Ok, so let’s break down this insane story for you:

Buzzfeed News: A Texas man who was warned not to swim in a river due to an alligator sighting, but jumped in anyway, was attacked and killed early Friday near the Louisiana border, police told BuzzFeed News.

Tommie Woodward, 28, was at an outdoor bar at a marina in Orange, Texas, around 2:30 a.m. local time when he defied a sign warning of alligators and entered the bayou waters.

A woman with Woodward warned him not to enter the water because of the risk, prompting him to reply “Fuck that alligator,” Enmon said.

Just before he jumped in, the woman spotted the gator, Enmon said. Woodward was attacked almost immediately.

“It was pretty much immediate,” Enmon told BuzzFeed News. “He had puncture marks on his upper right shoulder, and his left arm and elbow received severe damage. The alligator pulled him down and he came back up yelling.”

Obviously, this is extremely sad. However, it should also serve as an important lesson for everyone.

Alligators. Sharks. Snakes. Bees. Hell, even squirrels. Don’t mess with nature. Especially if you’re drunk. You are not Bear Grylls and you are not the second coming of Steve Irwin.

On the other hand, “Fuck that Alligator” isn’t the worst last words one could say. I mean, he probably shouldn’t have followed through with his insult. A simple wave of the middle finger would have gotten the point across just fine, I think. 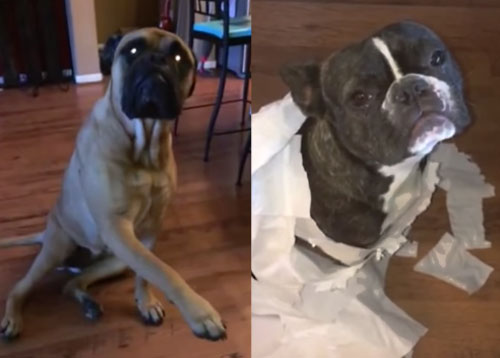 Snitches get stitches, Mastiff. Remember that.

I think it’s pretty clear that this Mastiff has no allegiance to any canine. He literally ratted out his dog. He didn’t even care that he was ratting him out. No remorse at all. I mean, he’s wagging his damn tail!

On the flip side, this poor French Bulldog just had his heart ripped out by his best friend and got shamed in front of 2 million YouTube viewers. This Frenchie needs to make Michael Corleone and give his “friend” the Fredo treatment.

The ocean is filled with a lot of NOPE lately

Sharks are so hot right now.

And I’m not just talking about Sharknado and Shark Week. I’m talking about the asshole sharks that are taking over the beaches and ripping people apart. It seems like every week I’m reading a new terrifying story about these monsters.

“New breed of sharks who can shoot guns found everywhere”

Yeah, so the last one I made up. But it won’t be long before we start seeing them. These dudes on their paddle boards are either really dumb or brave. I haven’t decided yet. However, unlike these dudes, I’m throwing in the white flag. Congrats sharks, you’ve won the Summer. The beaches are yours. 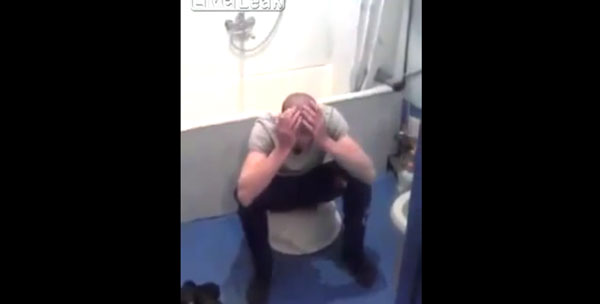 It’s no secret that, as men, we like to blow stuff up. Destruction is fun. Always will be.

However, I’m pretty sure we do not and should not enjoy blowing ourselves up. I’m not sure what exactly this guy was expecting results-wise. He had to have lost a bet, right? Oh well. Congrats one the second butthole, man.

Also, gotta love his friends just laughing at him. Not even asking if he’s ok. Male friendship 100%.