This puppy is done with being penned in. As a fairly small fellow, he makes the only logical decision — escape through the tiny gap. While his sibling watches from the back, like the clearly smarter dog he or she is, the puppy attempts to force his body through the gate.

At first, it looks like it’s going pretty well! Got the head through, got the shoulders, which are probably the widest part of his body. But then the pup just gets too excited about his progress or too panicked about being pinched. While he flails, disconnecting the gate from the wall entirely, his sibling makes a break for it, leaving the poor guy doing all the work stuck, upside, in the fence. Life just ain’t fair.

We all know Canada’s a different place from the rest of the world. Perhaps how they are most different is how they handle their road rage.

When two guys get into a disagreement on a highway, a cop happens to be standing nearby, filming a segment for local CBC News. The cop cranes over the overpass to monitor the two as they get out of their car and argue. Although the two gesture at each other and fake swing their arms around, they never get past huffing their chests intimidatingly. As they get back in their cars, the cop shouts “Everyone’s a winner… no worries.”

It’s truly a beautiful display of what it means to be Canadian.

In case anyone forgot, it’s really, really dumb to mess with a bull.

Bull taunting is unfortunately still a common occurrence in many places. This dude, however, is clearly not even trained to work with bulls and decides to mess with this one anyway. If you somehow didn’t notice, the bull’s horns are literally on fire. This dude is literally playing with fire. And a bull. I’m never so confused about people’s motives as when watching them taunt wild animals.

Most of me hopes this dude is okay, but there is a part that’s saying, well, that’s what you get for trying to mess with a bull on fire. 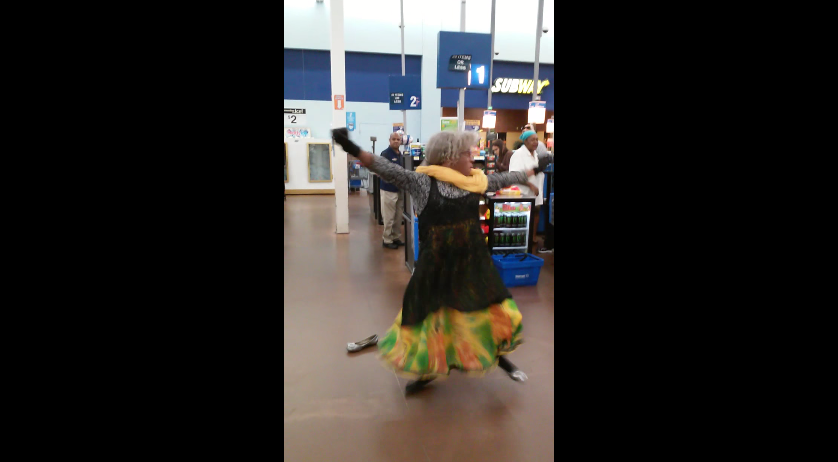 Granny Myrtle busts out the moves for her food stamps!

Granny Myrtle has got the moves! This colorfully dressed lady is so excited about her food stamps that she starts twerking in the middle of Walmart. I don’t know whether I should be impressed or just jealous. I have never been as flexible as this literal grandmother is. Granny Myrtle may just be my new inspiration for fitness and dancing.

Unfortunately, my white girl booty is probably still not up to par for those moves. If you’re loving Granny Myrtle as much as me, check out her Twitter, @grannymyrtle! 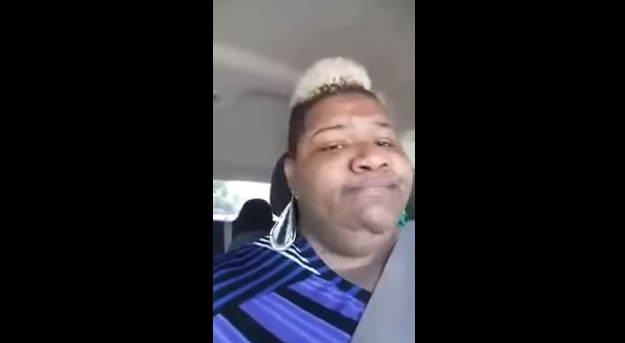 She has a reminder just in time for Shark Week.

When people say they’re going to the beach, most of the time we assume they’re going to have a great time. This lady, however, knows the truth. The beach is safe, sure. But not the ocean. The ocean is the shark’s house.

Go to the beach, go to the aquarium, go to a pool. But do not go into the ocean. After all, sharks aren’t the only terrifying thing living there. Just check out this creature. Remember, whatever you do — stay away from weird, killer ocean animals. 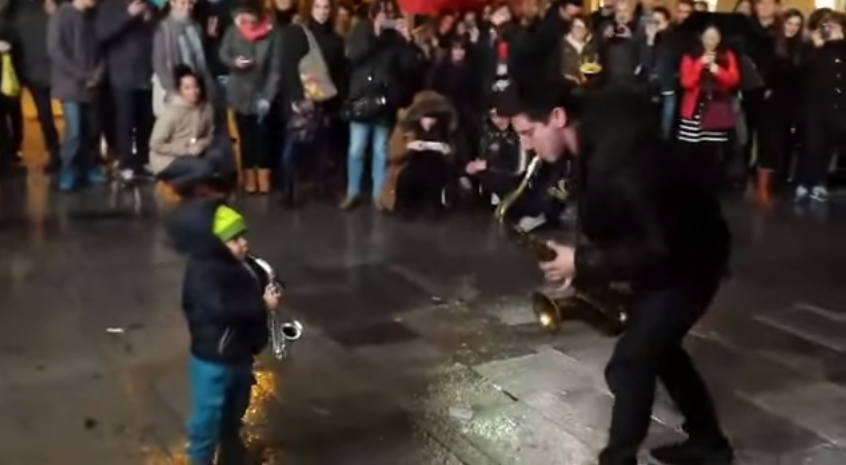 This little boy has adored Justin Ward, a saxophone player and busker, for years. When he got the opportunity to meet Justin, he brought his own tiny saxophone to play along. Although the little fellow can’t actually play the sax, he certainly knows Justin’s moves! The little boy mimics classic saxophone stances as the pair play together.

I’m sure this dude will remember meeting Justin for the rest of his life, whether or not he ever learns how to play the saxophone. I wouldn’t be surprised to see him tearing up the music scene in a few years anyway!

Like so many of us yesterday, this dog was glued to the screen for the Women’s FIFA World Cup Championship. So glued that even his adorable baby companion will not get him away from the screen.

The little boy tries desperately to get some attention for play time, but the dog just will not have it! He ducks and dodges each pat, all while keeping his eyes trained on the screen. The women’s team may have found their most dedicated fan! 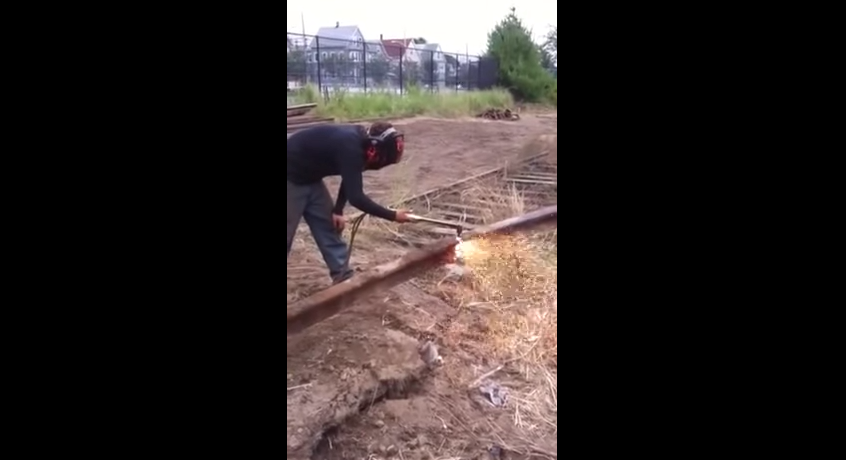 Sometimes, even wearing the proper safety equipment won’t save you from pain.

When this guy attempted to break apart a rail using his blowtorch, he wasn’t expecting the rail to whack him in the face! He gets hit so hard that he flies backwards and loses his protective gear. Hopefully, he’s not too hurt by the hit and has great worker’s compensation! Remember that you should never attempt to use power tools like a blowtorch without proper training. Even people who are careful get hurt! 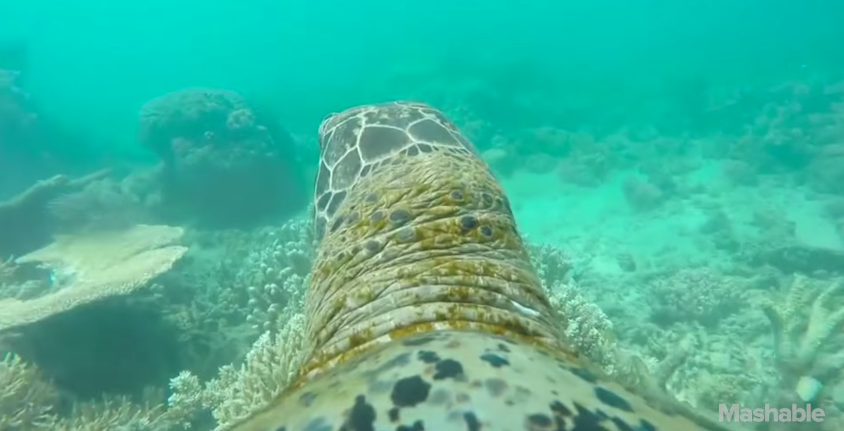 Ever wanted to be a part of Finding Nemo? If we’re anything alike, you would have loved to swim on Splash’s back with Merlin and Dory. Well, now you can.

Someone very smart managed to put a GoPro on a turtle’s back, giving us a beautiful view of the Great Barrier Reef never captured before. Although divers have shown off video of the community under the sea before, the fish are much more active when being filmed incognito by one of their own. This two minute video has got me feeling like I’ve just gotten back from a two week vacation. 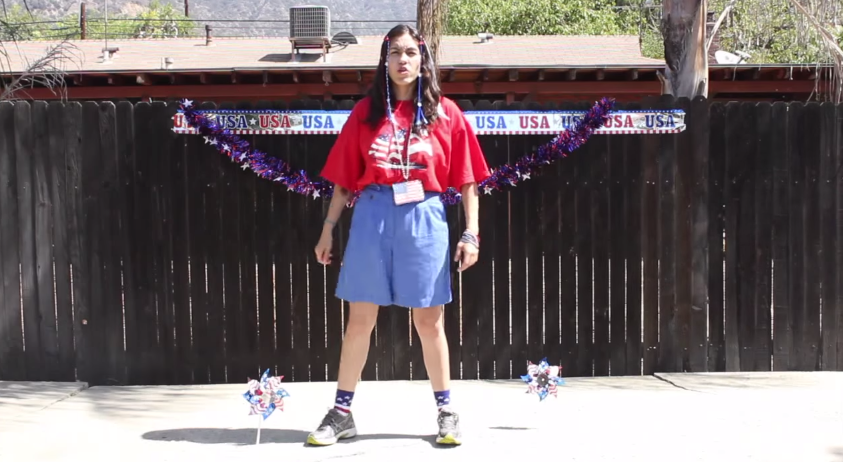 Seriously, Rosa G is reppin’ for Independence Day. Check out her smooth moves and sick rhymes about that indomitable national holiday, the Fourth of July.

Just check out those stellar outfits, the beautiful mini flags and the outstanding special effects. Heck yes, that is Rosa G 35 times to create the American flag with her appropriately colored tops.

This song is a true celebration of this nation and its over the top commitment to Independence Day. Keep doing your Fourth of July dance, Rosa. The rest of us will keep rocking too. After, it’s the best day of the year.